The Eternal City of Rome is crowded with publicized monuments, fountains, columns and ruins. You can’t walk the streets of Rome without accidentally tripping on something ancient every so often while trying to follow the tourist map in your hand,
working your way through piazzas connected by cobble stone, enjoying your gelato. The Colosseum is one of the most famous landmarks and a symbol of travel. There is however, more to the Colosseum than a peaceful walk through an ancient amphitheater with a past of gruesome spectacles. The Colosseum is also a museum and within its walls the arcades hold various displays of items related to its glorious days of on-going theatrical drama, animal hunts, gladiator contests and mock sea battles. The museum also offers a varied collection of original Gladiator wear, weapons and related props that were all once part of a grand stage before an engaged and passionate crowd. 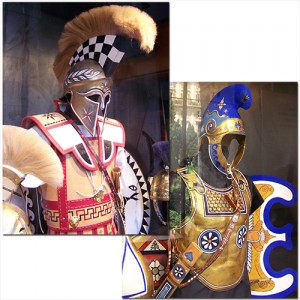 Gladiator attire pushed the creative boundaries for armor of combat; it was all about the theatrical entertainment. The imaginative designs borrowed influence from corners as far and wide as the Roman Empire itself stretched. The gladiator armors were costumes that took on the form of many combative stock characters: the celebrated hero, the untamed barbarian, the iron clad executioner, the exotic animal hunter and the condemned criminal. Even female gladiators made rare appearances in the arena. Some of the emperors were said to have performed in the arena as well, under cautionary circumstances, obviously. There were many specific types of gladiators who specialized in using different weapons and wore the appropriate gear to fit the role. The audience knew and recognized these types well. 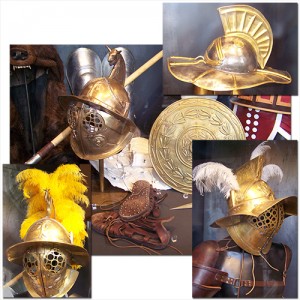 While much of the armor provided protection, such as body shields, leg guards, breastplates and shoulder guards, some of the heavy iron scaled armors were no doubt meant to provide a look of theatrical intimidation rather than an enhanced gladiatorial advantage. It was a choice between agility and protection, but fair play in the arena was important to the audience. It was not the gruesome killings that drew the crowd, but the challenges the victor had to face while committing such gruesome killings.

While gladiators usually held a low social standing, they had a celebrated entertainment value. They were a common theme in the arts and many mosaic combat scenes have survived the time period. Gladiator attire could be expensive and lavish, yet, they were worn by a slave. Gladiators were segregated from the Roman populace and schooled under harsh conditions, but as all slaves, they could earn their freedom. Unless you were sent to the arena as a noxii, a disposable gladiator, only the best made their way to Rome and the Colosseum for combat. The Colosseum held a promise of either extreme: honor or dishonor, to kill or be killed. But judging by the museum’s wardrobe on display, they finished their battle in style.

Viking Cruises: Are You Ready to Take the Grand European Tour?