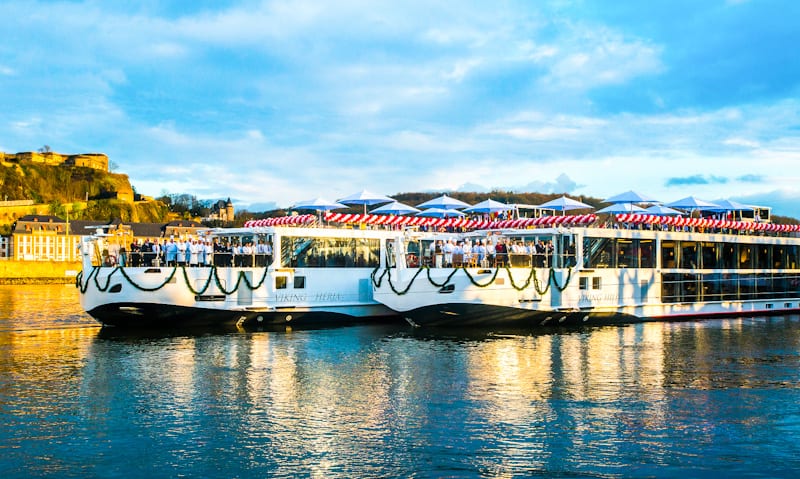 If good things come in 3’s, what happens in 7’s? Viking’s beautiful new ships! This past March, Viking welcomed seven new river ships during a celebration on the Rhine River in Basel, Switzerland. This launch is the latest milestone for the company, which was recently named #1 River Cruise Line by Condé Nast Traveler.

Keep reading below to find out everything you need to know about Viking’s newest ships.

Of the seven ships, six are Viking Longships. This means they provide the most rewarding way to explore Europe. Expect unprecedented levels of comfort, including spacious staterooms with full-size verandas and the most al fresco dining. Click here for a quick video tour of the Viking Longship.

“We focus on the destination, and we provide travel experiences that allow our guests to learn, to enrich their lives and to explore the world in comfort. It is ‘The Viking Difference’ that has made us the leading river cruise line in the world – and has helped river cruising become one of the fastest-growing segments of travel,” said Torstein Hagen, Chairman of Viking.

The six new Viking Longships are:

The seventh ship, Viking Helgrim, was inspired by the Longships design and built specifically for the Douro River in Portugal. The six new Longships will be deployed on Viking’s most popular itineraries on the Rhine, Main, Elbe and Danube Rivers.

Travel the world in unrivaled elegance onboard any of Viking’s ships. Designed for discerning travelers with interests in history, art, music, and cuisine, Chairman Torstein Hagen often says Viking offers guests “the thinking person’s cruise.” Ships are small to get guests closer to their destination, with more time in port and more overnights. With the most al fresco dining opportunities whether on the rivers or at sea, featuring regional cuisine and always-available American classics, Viking’s guests can truly dine in their destination.

Every cruise fare includes an outside stateroom, a complimentary shore excursion in each port of call, all onboard meals, and all port charges and government taxes. Guests also enjoy many complimentary amenities as part of their fare, including beer and wine with lunch and dinner service; Wi-Fi; and cultural performances as part of the Viking’s Cultural Curriculum® onboard programming.

So, what are you waiting for? Connect with a Travel Planners International travel advisor today!

Learn Why AmaWaterways is our May Partner of the Month