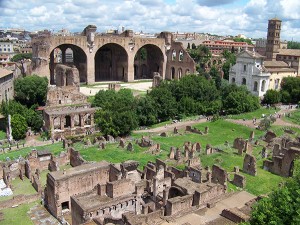 The Renaissance spanned roughly through the 14th to 17th centuries and it was a re-birth of the ancient classical era after the Dark Ages. The renaissance first started in the Italian city of Florence through the works of artists and writers spurred by political and cultural changes of the day.  Due to the artistic dependency of patronage, the classical theme was set in motion much due to the rich and powerful Medici family. The Medici’s sought to commission art outside the religious themes that dominated the time period. Besides a revival of the romanticized mythological themes of the classical era, a renewed interest was spurred in classical architecture, mathematics and natural philosophy (predecessor to modern science.)

As the renaissance spread through-out Europe, bringing with it a new artistic and academic focus, it became fashionable for young aristocrats to visit the great master pieces of the classical era as part of their classical education, (mainly Roman art and architecture.) This became known as the Grand Tour.

During the 16th and 18th centuries a standard itinerary was popularized. While detours included many European destinations, the grand tour typically started in London and included Paris, but focused mainly on Italy, especially Rome. Few visited as far as Greece, which was still under Turkish rule. The grand tourists visited famous ruins, architecture, fountains and churches. Admission to Greco-Roman statues and paintings included both private collections and museums. Travel guides were available for the grand tour and the tour typically lasted for many months and sometimes years. Besides visiting art and architecture, a grand tourist could also listen to music, visit theaters, be tutored in languages, fencing, dancing, riding and other popular activities. The grand tour was often seen as a rite of passage and was considered a symbol of status. 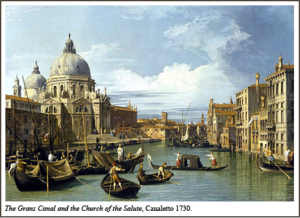 Grand tourists returned to display items otherwise unavailable at home. Popular souvenirs included art, books, sculptures, clothes, glass, coins and other cultural gems. Micro-mosaic became popular and often depicted famous landmarks. It could be worn as jewelry or be sent home in the form of small pictures to friends and family as a fore-runner to the modern post-card. Cityscape and landscape paintings or vedute became immensely popular during the time of the grand tour and provided “snap-shots” the tourist could bring back and present as a visual tale of their travels. Etchings of the grand tour also became very popular. Some grand tourists commissioned their own artists to accompany their travels.

While it was common practice to hire a personal tour guide for the grand tour, printed travelogues or itineraries became popular to both travelers and non-travelers. Published accounts and letters of personal experiences gave insight to what the grand tour could offer for the populace of the time, but they also help illuminate the historic trend for us in modern times.