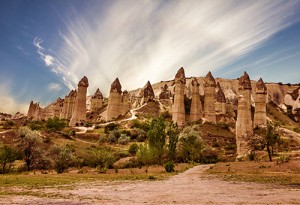 Situated right in the heart of the Anatolian Region of Turkey is Cappadocia, a region best known for its unusual landscapes and unbelievable underground cities. Visitors to Cappadocia often describe it as looking truly out of this world or perhaps like a lunar terrain, but what lies below is equally as impressive.

Cappadocia is a large and undefined region as well as a UNESCO World Heritage Site, which means that there is a long list of things to do, see and explore. Whatever your interests, be sure not to miss these five amazing stops while touring Cappadocia in Turkey.

In the 1960s, this monastery was rediscovered after being forgotten about for hundreds of years. Located in the town of Gümüşler, the monastery was built in the 10th century and is carved entirely out of rock.

From the exterior, it looks like an ordinary rock formation, but there are some holes that could be natural erosion. Once you step inside, however, prepare to be stunned. The enormous cave-like monastery has art painted on the walls and is completely unexpected amongst the barren landscape outside.

The town of Göreme was established close to 2,000 years ago, and there is evidence that Saint Basel had settled in the area in the 4th century AD. Göreme was largely a religious destination for hundreds of years, which is why virtually all of the landmarks in the Göreme Open Air Museum are churches.

You can walk all day and spot new cave churches, fairy chimneys erected toward the sky and a small indoor museum detailing the history of the town and its inhabitants.

For centuries, the town of Avanos has been known as a pottery town. Divided by the Kızılırmak River, the town always had a fresh supply of red clay to use for pottery. On a visit to Avanos, you can watch masters at work and even purchase souvenirs that remind you of your time in Cappadocia.

4. Sleep Underground in a Cave Hotel

Thanks to a large number of tourists who flock to Cappadocia in Turkey each year, finding accommodation is not a challenge. However, for something truly unforgettable, consider staying overnight in one of the cave hotels.

These establishments are secure caves that were once homes or churches, but today they house travelers who want a cool place to sleep at night and some amazing photos to show off to friends once the trip is complete.

5. Admire the Three Beauties of Ürgüp

While the landscape of Cappadocia is dotted with remarkable structures, you won’t want to miss the Three Beauties of Ürgüp.

The Three Beauties are three fairy chimneys that are remarkably well preserved and very easy to spot. Plus, the town of Ürgüp is historically significant since it is home to everything from Roman tombs to Byzantine-era monasteries.

For amazing landscapes, archaeology and unparalleled religious history, the region of Cappadocia in Turkey is a wonderful destination for intrepid travelers.

Learn more about how you can benefit from partnering with Travel Planners International to grow your travel agency.