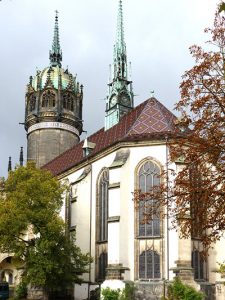 On October 31st, 1517, Martin Luther nailed his 95 Theses, written in Latin, to the door of Castle Church in Wittenberg, Germany. This document was one of the most significant in all of religious history, and the protests of the church that it contained would serve as the catalyst for the Protestant Reformation.

This event was a criticism of the Catholic Church, and it is from Luther’s actions that Protestantism as a whole was founded.

For those with an interest in religion or history, a tour in Germany could not be timed any better.

In 2017, it will be the 500th anniversary of Luther’s bold actions, making it the perfect time to plan a vacation to Germany. The Global Family of Brands, partnered with the German National Tourist Board, offers a fantastic option for travelers who want to attend the festivals, exhibitions and concerts leading up to this significant event as well as follow in Martin Luther’s footsteps.

The Central German city is where Luther first attended university and where he earned his master’s degree in 1505. It can be argued that this is where he learned about spirituality, modern religion and problems in the Church.

You can tour the University of Erfurt, see the still-standing Augustinian friary that Luther joined in 1505 against his father’s wishes.

Although Martin Luther eventually left Erfurt, he remembered it fondly as the “City of Towers” thanks to the spectacular steeples and spires on the dozens of churches and cathedrals in the city.

Witternberg, Start of the Reformation

While there were a variety of factors that caused the Protestant Reformation, the official start is often pinpointed to the day when Luther nailed his 95 Theses to the doors of the Schlosskirche, or Castle Church, in the city.

The University of Wittenberg is also where Luther held his first teaching position. For decades, Luther was the staff’s Doctor of Bible, and he served as the expert on religion for students as well as for faculty members and the community at large.

Today, travelers can see the university campus, the Castle Church, Luther’s home at the Black Cloister that now serves as a museum, and the 16th century Rathaus, or City Hall, that boasts statues of Luther and other Reformation leaders.

One of the biggest influences of Luther’s 95 Theses was hearing the Bible read aloud in the vernacular rather than in languages like Greek and Latin. To make that happen, Luther himself translated the text, taking just 10 weeks to do so.

It all happened in 1521 and 1522, when he stayed in Wartburg Castle under the pseudonym Junker Jörg, which was necessary due to Luther’s excommunication from the church.

Visitors to the castle can visit this UNESCO Heritage Site and explore the scenic surrounding areas of Eisenach, Thuringia.

As one of the oldest cities in Germany, Worms is worth a visit in its own regard. However, it should absolutely be included in a Reformation tour because of its connection to Luther.

In 1521, Luther stood before the imperial council of the Holy Roman Empire in Worms. Luther was summoned because of the controversy of his 95 Theses, and the result of the council meeting was the man being branded a heretic.

The city today is home to monuments, gorgeous outdoor parks and a Romanesque cathedral that is more than 1,400 years old.

Independent travel agents who want to showcase incredible tours for clients shouldn’t miss out on this significant event. The 500th anniversary of the 95 Theses, and the decade-long celebration of Luther that comes before it, is a fantastic reason to explore Germany.