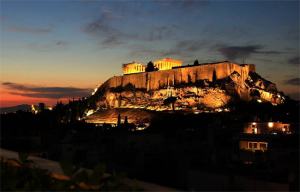 Admit it…you’re obsessed with ancient Greece. You’ve read books and visited your local museum to see artifacts. But you’ve haven’t booked your Athens vacation. Why not? Athens is different from most large cities due to the absence of tall buildings – rarely tower more than 8 stories and there’s no typical skyline. The reason for this is that the three hills that frame the inner city display ancient ruins such as the Acropolis. No buildings are allowed to compete with or obscure these hills.

Getting around Athens is easy because you can walk or take the tram or subway. While Athens has its traffic and pollution, it’s also city of fragrance. You may smell a familiar scent and turn around to find large rosemary bushes planted behind you. Athens is also a city of marble. You’ll find it everywhere. Watch out for those seemingly ice-skating pigeons and sparrows as they slip around on polished floors.

Are you starting to form a picture in your mind of you strolling around Athens? Keep reading to discover the ancient wonders of Greece and where to stay. You’ll pack your bags in no time.

Top Sights to See in Athens

For a unique photo-op, visit Panathenaic stadium, the first modern day Olympic. It was first built ca. 566 BCE and is built entirely of marble. Panathenaic stadium was renovated in 1869 and has hosted several modern Olympic Games. It includes a small museum, but you won’t find many tourists in the museum or in the stadium.

Philopappos Hill doesn’t include major temple ruins, but it’s a nice place for those with an interest in ancient Greece to take a stroll. The park includes many ruin remains that require a bit of an imagination to be appreciated. The main points of interests are Philopappos Monument at the very top of the hill (walk and hike around – shoes will get dusty) and Socrates Prison. If you make it to the top it is also the best city view of the Acropolis.

The ancient Agora of Athens is worth a visit and includes many ruins and museums; you’ll find the temple of Hephaestus – a well preserved Greek temple.

At the Herakleidon museum, you can see the exhibition the Amazing Inventions of the Ancient Greeks on display until January 10, 2016. It’s a small museum filled with curious items such as a robotic servant that pours wine, automatic clocks and hydraulic telegraphs or steam machines – all from ancient Greece. One of the most impressive items is the reconstructed analog computer of Antikythera, the world’s oldest computer dating back to 150 and 100 BCE. One of the simpler yet creative items – Pythagoras Cup, can be found as a ceramic and hand painted souvenir in many of the souvenir shops. If you can’t visit Athen’s during the exhibition, it can be found at the Museum of Ancient Greek Technology in Katakolo, Elis, Greece.

Where to Stay in Athens 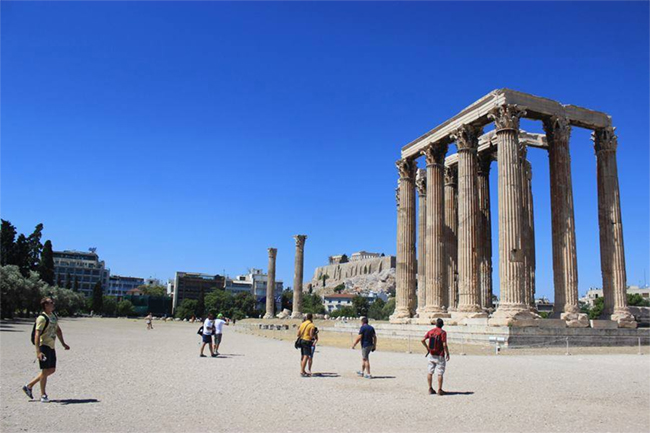 You’ll want to check into the Athens Gate Hotel – it has a rooftop terrace restaurant (excellent breakfast buffet and dinner menu) and bar that gives you a spectacular view of the city. You’ll see the Acropolis on one side and on the other, the Temple of Olympian Zeus. The Athens Gate Hotel is a hotel with excellence beyond the 360 degree view. Accommodations are flawless and the staff welcoming and helpful. I asked one question about the Athen’s observatory and the pretty girl at the front desk, Kleopatra, went far and beyond to make sure I received all the information I needed. Want to book your stay? Contact your TPI travel agent today.

Visualize yourself standing at foot of the Parthenon. Can you feel the presence of the goddess Athena? After all, the temple is dedicated to her. As you leave and walk into the heart of Athens, you may sense two mythological ghosts beside you, the heroes Jason and Hercules. You’re in good company as you go into a café, order a Greek coffee, sit down, and chat with locals. Sound good? Contact your TPI travel agent today. With the use of the point and click booking engine on the exclusive agent hub, TPICENTRAL, he or she can book your hotel. You’re one step closer to traveling to Athens. Have a memorable time!