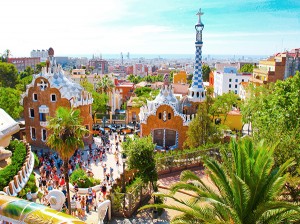 Barcelona is Spain’s second largest city, and it is known for its rich heritage, Catalonia pride, outdoor markets and fantastic Spanish cuisine. In addition, Barcelona is known for its collection of buildings by famed architect and artist Antoni Gaudi, a name that is now synonymous with Barcelona.

No trip to Barcelona would be complete without admiring some of these works in person. Some of the best, which truly reflect the Gothic, natural and whimsical influences on Gaudi, are listed below. 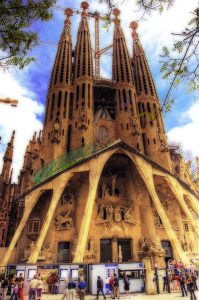 This may be the most important of Gaudi’s works, and it is a structure that is still, technically, under construction. First erected in 1892, La Sagrada Familia is an enormous church that many say looks as if it was made of bones.

Highly decorative, the church is also stunning from the interior, and it offers remarkable views over the Eixample District where it is located. Take time to ride the elevator to the top, but walk down the winding staircases for additional vistas over Barcelona.

One of Gaudi’s first projects was the Casa Vicens, which was a private residence constructed for a family that owned a ceramics business. Gaudi was heavily influenced by Islamic culture at this stage of his career, and the facade reflects that.

Casa Vicens also has a number of ceramic details, which is a result of the family’s main business. 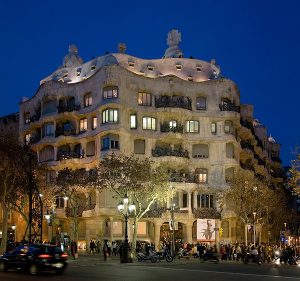 Arguably one of the most recognizable of Gaudi’s structures is La Pedrera, which is more sculptural than architectural. The facade is made of undulating stone, and wrought iron balconies act as decoration.

A complete standout from any other architecture in Barcelona, Spain or even the world, La Pedrera is a UNESCO designated World Heritage Landmark. 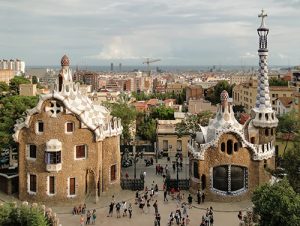 Another of Gaudi’s works recognized as a UNESCO World Heritage Site is Parc Güell, which was completed over a 14-year period starting in 1900. From above, the park looks almost like a theme park with bright, bold colors and whimsical shapes.

While there are countless structures to admire, many of which are covered in Gaudi’s trademark ceramic mosaic tiles, the most popular spot is the colonnade hall.

This covered walkway makes you feel as if you are walking through a save and experiencing the solitude of nature in an urban park. Other highlights of the park include El Drac de Gaudí at Finca Güell, a stunning iron dragon, and the Palau Güell, which was the official residence of the Güell family, who once owned the park property.

One of the most controversial buildings ever designed by Gaudi was the Casa Batlló, which was both criticized by the local government and then given an award just a few years later.

Gaudi simply renovated an existing structure to create this piece of architecture made with natural stone, ceramic and forged iron. If you’re a travel agent piecing together a niche getaway for travelers interested in architecture, Casa Batlló is a must-see destination since it so perfectly summarizes Catalan Art Nouveau style.

A huge part of Barcelona’s cultural significance and architectural beauty comes from the unique structures designed by Antoni Gaudi.

Learn more about the support Travel Planners International offers to travel agents to help them be successful.